An investment begins that will create a modern prototyping room for R&D development, expansion of a new production hall and a powder coating shop based on nanotechnology. At the same time, a modern sewage neutralizer facility was opened. Neapco carries out many of its investments, especially the innovative ones, with the use of EU support from the Opolskie Voivodeship and the national pool. Thanks to the support, the company is implementing, among other things, a project for reduced-weight and increased-performance driveshafts for modern passenger cars.

It is also worth adding that the Neapco company, of which the Praszka plant is a part, celebrates its 100th anniversary this year. The Neapco plant cooperates with such giants of the automotive industry as BMW, Ford, Daimler and VW. In the world, this brand has two factories in Europe (in Poland – in the Opolskie Voivodeship in Praszka and in Germany), as well as four factories in North America and an engineering office in China. 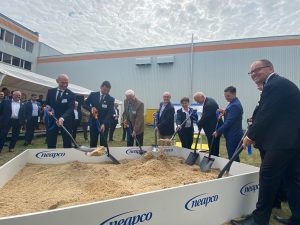